He took forever to make a decision, lived his last days in extreme pain, and gave away his fortune to charity.

At his peak, billionaire Howard Hughes was one of the most brilliant minds on the planet – daring, inventive and passionate to a fault. Today, we can learn from the best of Hughes to ignite our careers and start living to the fullest.

“Passion will make you crazy, but is there any other way to live?”

Hughes followed his passion. His fascination with flying put him in the cockpit. His love of the movies made him a producer and director. He didn’t wait for the “perfect moment” or seek the approval of others. How many of us today allow our doubts to stop us? It is but one life. Let’s follow our passion and see where it leads.

Howard Hughes made his lofty dreams public, knowing that public disclosure would forge an inner commitment. Today, many of us keep our hopes to ourselves, out of fear they won’t happen and we’ll look foolish. Perhaps the opposite is true. By proclaiming our goals, we can cement them in our minds and hearts, directing our subconscious to carry them out.

Scientists now tell us that the brain is capable of processing 30 billion bits of information per second and that no person is born “stupid” or “intelligent”. We make a conscious decision to limit ourselves. Hughes realized that his mind could do amazing things, if he let it. We all need to respect our minds more. The processing power at your disposal awaits your decision to use it.

Howard Hughes hated when anyone told him he couldn’t do something.

His objective was to prove them wrong. In fact, it could be argued that Hughes accomplished all that he did, not because people knew he could do it, but rather, because they said he couldn’t.

As an only child, Hughes became a millionaire at age 18, inheriting the tool company built by his father. But tools were not a passion for Hughes who was drawn instead to the glamour of Hollywood.

His movie career began at the tender age of 21 when he created a film called “Swell Hogan” but Hughes, a chronic perfectionist, hated the film, blaming the director he hired, 1920’s actor Ralph Graves, who had never directed before. Hughes ordered that the comedy film be burned. (Apparently Hughes and Graves were the only people who ever saw the movie).

Hughes hired much more experienced directors for his next movie “Two Arabian Knights” but they all said Hughes was impossible to work for – some left, others were fired. In the end, Hughes appointed himself the director. The film won an Oscar.

Believing himself to be the best director in Hollywood, Hughes sat in the director’s chair for his movie “Hell’s Angels” about World War One pilots. But to make the picture realistic, he used real vintage planes and staged real aerial fights – costing the lives of three pilots. Hughes flew one of the planes himself, and crashed it.

Despite these horrors, the 1930 film was a hit, cementing Hughes as a respected leading figure in the movie business.

Hughes would go on to produce more movies and date many of tinsel town’s leading ladies. In 1943, he directed actress Jane Russell in the movie “The Outlaw”. Hughes was obsessed with Russell. She was already married and a devout catholic, dead against affairs. Years later, Russell insisted she never had an affair with Hughes although the Hollywood rumor mill said Hughes got his way. 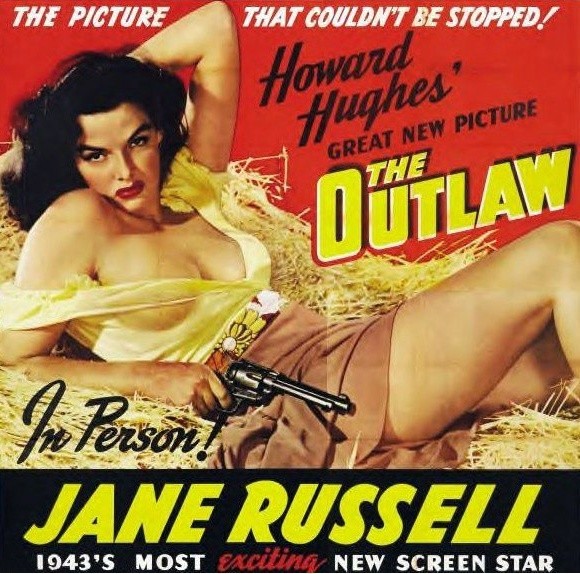 The Howard Hughes movie “The Outlaw” launched the career of Jane Russell. But the censors didn’t like it, saying it showed a little too much of Russell. They forced Hughes to take out half a minute of the film (considered too racy), allowing it be shown briefly in 1943. Hughes was a genius at marketing, launching a secret campaign to ban his own film, knowing that would only make the public want to see it even more. It worked, and “The Outlaw” received general distribution in 1950 to rave reviews. (The movie poster seen here had also been banned).

Hughes was officially married twice, first to socialite Ella Rice. Almost immediately after marrying her, it was reported that he completely ignored her, causing her to leave. His second marriage was to actress Jean Peters (1957-1971) who observers say was the only woman Hughes really loved, despite his many affairs. When the relationship ended, the possessive Hughes had security officers follow Peters wherever she went, informing any man interested in her, to stay away or Hughes would ruin their careers.

While in Hollywood, Hughes proposed marriage to many women who turned him down. He once offered the husband of actress Billie Dove a great deal of money to divorce so Hughes could marry her (a scheme that failed). 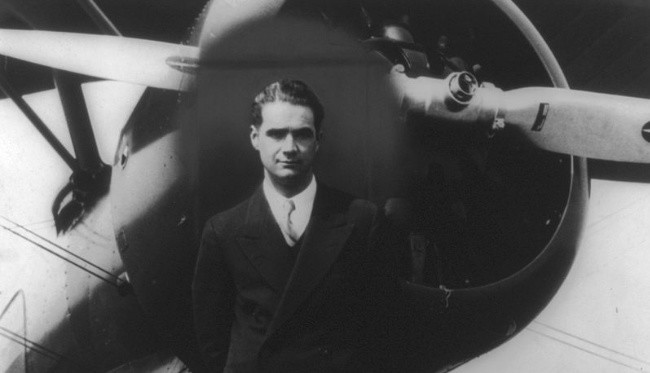 In this old publicity shot, the photographer created a dark circle behind the billionaire to make sure Hughes could be seen clearly.

Howard Hughes loved his airplanes. In the words of an engineer who once worked for Hughes, Robert Runnel, “Howard loved the drama of flying. I think it was his one and only true love.”

Hughes launched his high flying business, simply named “Hughes Aircraft Company” in 1932. For years, it was small but exploded in size as a result of World War Two, going from only 4 full time employees to 80,000. (General Motors eventually bought the company in 1985). Hughes set not one, but two records in the flying time between the west and east coast.

As a manager, Howard Hughes was hands-on. Unafraid to get his hands dirty, he could be seen repairing aircraft himself. His philosophy was to accomplish big goals through smaller steps – each one leading to the prize. He hired people who shared his values of hard work and dedication. For all of these reasons, he was greatly admired by the people who worked for him. In his prime, Howard Hughes was viewed as the one of the greatest business leaders of all time.

But his days in the limelight would fade. The transformation from successful, dashing young billionaire to deteriorating recluse, came on July 7, 1946 when Hughes crashed his experimental twin-engine army plane in a Beverly Hills neighborhood.

The enormous plane tore much of the roof from a two-story dwelling, with the right wing slicing through an upstairs bedroom of another home (narrowly missing the occupants).

The plane exploded almost killing Hughes, who was given a 50-50 chance of survival. A year later – the unstoppable Hughes flew a second version of the plane, this time successfully.

However, Howard Hughes would never quite be the same. 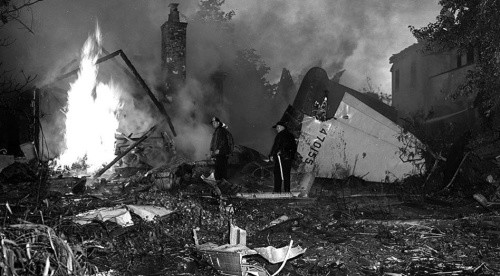 Hughes crashed his twin-engine plane directly into a residential neighborhood in 1946 and almost died from his injuries. The magnitude of the devastation can be seen in this photo.

Howard Hughes had a remarkable ability – at least for a while – to follow his passions despite his demons. Throughout his life, he suffered from a severe form of obsessive compulsive disorder. He would spend endless hours measuring the size of the peas he would eat on his plate. Often, he would watch the same movie hundreds of times.

In the late 1940s, Hughes locked himself in a film studio to screen his own films. For months, he stayed inside, never venturing to the outdoors, consuming only chocolate bars and sitting naked. In the room, he surrounded himself with Kleenex boxes, placing them on top of each other in various arrangements. He emerged four months later without having taken a single bath or cut his nails. (He would later have his nails cut only once a year).

Medical experts say Howard Hughes appears to have suffered from a condition called allodynia which can cause pain from even the slightest touch. It can result from nerve damage and injuries, such as those he likely suffered in his plane crashes.

Hughes was also plagued by an irrational fear of germs, refusing to touch anything without the protection of tissue paper. He demanded that other people in his presence remove any trace of dust on their bodies and clothes.

Eventually, the once very-public Howard Hughes would refuse to see anyone, communicating only through notes slid under the door. 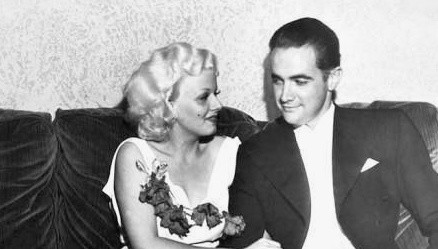 In happier times, Howard Hughes is seen with one of his Hollywood girlfriends, Jean Harlow, who would die young at age 26 from the same disease that killed Hughes.

By the 1960s, Howard Hughes became a recluse, living in the penthouse of various hotels. He continued to work and study, staying awake for days with little or no food, injecting his body with codeine to numb his pain.

The end for Hughes came, fittingly, in an airplane on a flight from Mexico to Texas in 1976. The official cause of death was kidney failure. Hughes was a tall man at 6 foot four, but at the time of death, he was 90 pounds and unrecognizable. One of the richest people on earth was the victim of severe malnutrition. He died at 70 years old.

According to medical reports – while his body was ravished, the mind of Howard Hughes was in perfect condition to the very end.

It was a mind that saw no limits – one which filled itself with passion and relentless determination – serving as an inspiration for us today, so we can make every second count.

Today’s science and medical professions have Howard Hughes to thank. To avoid paying too much in taxes, in 1953, Hughes put his aircraft company under a non-profit organization he named “The Howard Hughes Medical Institute (HHMI).” (It was a move challenged by the IRS for many years). Since Hughes did not leave a will when he died, the Institute had the authority to sell the aircraft company to General Motors and benefit from the proceeds. Today, it specializes in biological and medical research and education. While Hughes is remembered for his days in Hollywood and helping build the aeronautics industry, it was his decision to create the medical institute which is his most enduring legacy.