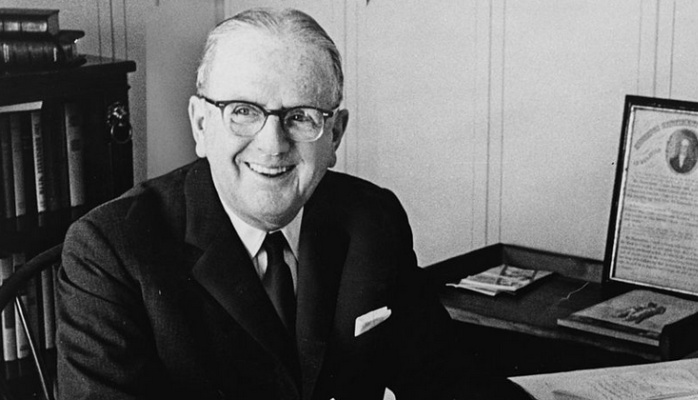 He is often credited with starting the positive thinking movement.

When author Norman Vincent Peale’s “The Power of Positive Thinking” was first published in 1952, even he was amazed that it stayed on the New York Times bestseller list for 186 consecutive weeks.

Although his best seller was first released 64 years ago, the words of Peale continue to be an inspiration to many. Here are eight of his teachings that can help us stay positive to grow our careers.

When a friend had to give a presentation in the hopes of securing a job, she was understandably nervous and unsure. But she loves acting, so I told her to act. “You’re doing a role in a movie”. She discarded her true nervous self and played the role. She got the job. We are all actors to some degree. If you lack the confidence to apply for a job, meet a special person or undertake a project – turn to your acting skills.

“Become a possibilitarian. No matter how dark things seem to be or actually are, raise your sights and see possibilities – always see them, for they’re always there.”

Even in troubled times, there are opportunities. We need only to keep our eyes and minds wide open. Ten years ago, I launched a videoconference business but competition was tough. The business was dying. One day, one of my employees told me that a client needed a lot of help in understanding how to use the software. Our service and training business, in which we teach people how to use new media technologies, was born. Look for every possibility.

“If you want things to be different, perhaps the answer is to become different yourself.”

Only when we change ourselves – adopting a new and different outlook, can the world around us change. So many of us go through each day fighting reality. Take a deep breath, slow down, handle things one step at a time. Adopt an alternative outlook – one that is open, accepting, serene and positive.

“Shoot for the moon. Even if you miss, you’ll land among the stars.”

Most people shoot low, trying to avoid disappointment. But shooting high often requires no greater energy and commitment as shooting low. The worst that could happen is you end up short, but still way ahead. Years ago a friend of mine wanted to be a famous singer. He was shooting for the top. He never made it big, but he did land lucrative engagements at large nightclubs and made an excellent living for himself – which would have never happened had he not reached for the top.

“Spend so much time improving yourself that you have no time left to criticize others”.

The world is full of complainers. But if each one of them worked on improving themselves, rather than criticizing others, there would be a lot less to criticize. Criticizing is easy. Looking at ourselves with an eye to being a better person – now that’s worth the time.

“Stand up to an obstacle. Just stand up to it, that’s all, and don’t give way under it, and it will finally break. You will break it. Something has to break, and it won’t be you, it will be the obstacle.”

Of all Peale’s teachings, I like this one the most. It reminds us that we can outlast, work around, or otherwise push down obstacles to move forward. Most problems are opportunities in disguise. Most so-called obstacles eventually die. And many are never as big as we think they are.

“Inaction is not only the result, but the cause, of fear. Perhaps the action you take will be successful; perhaps different action or adjustments will have to follow. But any action is better than no action at all.”

Peale believed that fear is what happens when we don’t have a plan. We don’t know what to do. By taking action, even if we’re not sure it’s the right thing, we can push fear aside. That fear dissipates further when we realize we can change gears if needed.

“Every person, if they are to have mental health and live successfully, must move away from past failures and mistakes and go forward without letting them be a weight. The art of forgetting is absolutely necessary.”

It’s hard to forget the past sometimes. It can hold us back and ruin our present and future. The past has no right to do that. It needs to stay in its place. The way I learned to overcome past demons was to focus my mind on the here and now, and to make plans. Lots of plans. Forgetting is easy when your mind is too full of what’s here and what could be.

When his famous book was released, a number of theologians, doctors and other academics at the time called Norman Vincent Peale a fraud. In fact, some said his teachings were dangerous because they made people feel good while avoiding the real issues in life.

Time would prove the “experts” to be wrong.

What Peale preached many years ago is turning out to be scientifically accurate. New research shows that positive thinking can widen our skill set.

Researcher Barbara Fredrickson from the University of North Carolina has conducted studies showing that positive thinking allows us to see greater possibilities. That, in turn, leads us to try more things – learning each step of the way. The skills we acquire as a result are beneficial years later.

Did Peale make up quotes and people who did not exist?

Norman Vincent Peale, who was also an ordained Minister, fought his critics by saying positive thinking has nothing to do with escaping reality. Instead, it’s about refusing to be beaten down by life. But Peale and his book were not without controversy. The book is filled with anecdotes and testimonials that are not named or sourced, causing some to believe he fabricated the book’s references. Peale was also later criticized for his opposition to John F. Kennedy simply because Kennedy was a Catholic. Despite his shortcomings, Peale – who died in 1993 – had a message that is needed today more than ever.