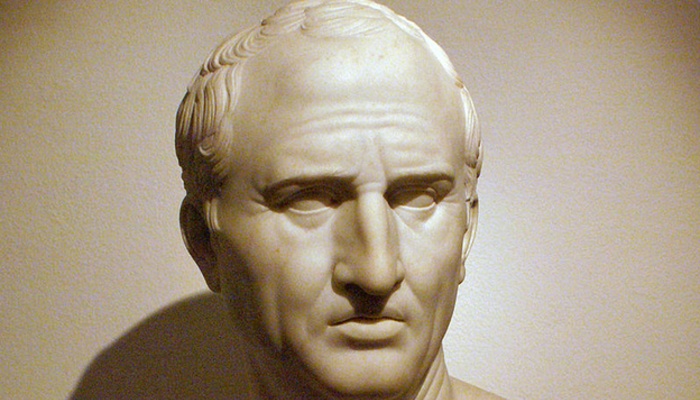 He was one of the greatest public speakers of ancient Rome. Philosopher, lawyer and politician Marcus Cicero, would end up murdered.

But while he lived, he expressed a management philosophy that is remarkably relevant to today’s rough and tumble business world.

In practicing the sage advice of Cicero, we can become outstanding managers.

Here, Cicero is saying that he doesn’t spend a lot of time laying blame when something goes wrong. Instead, he creates and invites a plan, solution or environment in which answers are possible. When things fall apart, find out why, put less emphasis on blame, and very quickly move to correct. Too many managers waste valuable time and resources by demoralizing people. We all make mistakes. The important thing is how can we learn from them and make things better?

Manage the creation of solutions over finding fault.

2. “ Silence is one of the great arts of conversation. ”

I once had a boss who, when questioning me about why something happened, would follow my response with silence. Nobody likes silence in a conversation. So I would speak again, and again- revealing more information (some I didn’t want to reveal). Sometimes not saying anything is the best way to talk.

That same boss would also be quiet when people were upset, emotional or just needed to be heard. Later, when I became a manager myself, I realized that the job was part coach and part psychologist.

3. “ What is permissible is not always honorable. ”

Were he alive today, Cicero would have had much to say about our digital age. While technically, we have the power to take the words and images of others, we know deep down that it isn’t right. In leading ourselves and others, ethics are more important today than ever, to stand out from the crowd, build a brand people can trust, and to unify our team. The manager who preaches strong ethics can expect her or his people to be more open and honest.

Being honorable is good for business.

4. “ If you have no confidence in self, you are twice defeated in the race of life. With confidence, you have won even before you have started. ”

As a manager, you have influence over your team. One of the greatest gifts you can give people is the building of confidence. Far too many stressed out, time-deprived managers pay lip service to this very important area. Confidence grows when a person achieves tiny victories over and over. Set your people up for those victories. Not only will they grow as people, but your department and company will grow too.

An important task as a manager is to build the confidence of your people.

Today, people become discouraged fairly easily. They are used to things not going their way. The headlines are filled daily with bad news. But as a manager, you are an ambassador for hope. You will have your own bad days, but publicly, if you always show hope – you can keep that hope alive in others. As long as we are breathing and kicking, there is always hope.

6. “ It is not by muscle, speed, or physical dexterity that great things are achieved, but by reflection, force of character, and judgment. ”

Too many managers mistakenly believe that being rough, forceful and demeaning will get results. While management by fear can and does work, it also builds resentment which will eventually lead to serious internal strife. People are not machines. Don’t rely on your managerial “muscle” to get things done. Instead, talk to people like human beings. Use your people skills, your character and your ability to explain how the work will benefit those who work for you.

Rely on your people skills, not your position.

7. “ Friendship improves happiness and abates misery, by the doubling of our joy and the dividing of our grief. ”

An old friend of mine dropped in on me the other day. It had been at least 10 years since we saw each other. We were both a little embarrassed that we hadn’t stayed in touch. Our goals, our family, our jobs – all vital. But today, too many of us are working our lives away at the expense of friendships we once had and once valued. As a manager, we need to recognize that our people have their own lives. They cannot perform for you and the company at maximum strength if work is the only thing in their lives.

Recognize the need for, and allow, personal time.

Cicero was against tyranny and it cost him his life, killed on orders from Mark Anthony and others who wanted to rule Rome with an iron fist.

While no saint himself, at a time over 2,000 years ago when people were routinely executed without trial – Cicero was highly respected as a leader with principles.

Were he alive today, we would likely see Cicero writing here on social media. An influential writer and linguistic expert, he is often credited with being the inspiration for the Founding Fathers of America. Thomas Jefferson acknowledged Cicero in his drafting of the Declaration of Independence.

Today, we can do the same – following Cicero’s sound advice to become outstanding managers.