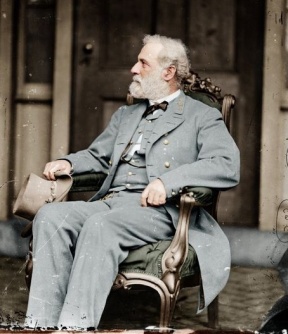 But it was not so much his talent on the battlefield that earned him universal respect – it was his character.

Indeed, General Lee of the U.S. civil war, was the kind of leader we so desperately need today.

Leadership – true leadership, is not about speeches and press releases. It’s not about slogans. And it’s not about promises. Instead, it’s about being genuinely interested in the welfare of the people you serve. Lee gave support and comfort to people in the war who lost loved ones. Others criticized him for it at the time, saying a leader of his stature should not spend time that way. The fact that Lee did, earned him enormous respect.

2. Leadership is about saying no the right way

At the start of the civil war, President Lincoln asked Lee to command the union army. But doing so would have meant that Lee would be fighting his own family in Virginia. He said no, but in a way that did not insult Lincoln – telling the President he was honored by the offer but his allegiance lied with his home state. Today, we need to say no to many things, but we don’t have to put others down in the process.

3. Leadership is about taking full responsibility

Lee was the first to admit when he made a mistake. He was a brilliant military strategist whose smaller army could surprise the much larger union army and win battle after battle. But when Lee lost, he said “it was my fault.” Impressed with that admission, his soldiers would disagree and blame themselves. If you’re leading a team, admit when you’re wrong. Rather than losing respect, you’ll gain it – more than you know.

4. Leadership is not about dishing out punishment

As the top general, Lee had power. But he didn’t use it to humiliate, punish or bully. He saw himself – and he was – a true southern gentleman – a man who knew how to quickly forgive and move on, without spending time on discrediting those who would make mistakes or disagree with him. That doesn’t mean he was soft. To the contrary, Lee expected the best from his army. Those who knew him said he had a talent for telling you that you were wrong, without hurting your feelings. Your dignity and self-respect remained intact.

5. Leadership is about seeing everyone as human

In war, we often do not recognize the enemy as human. Lee was the exception. In fact, he never referred to people in the north as the enemy. Instead, he called them “those people who live up there.” Today, in business, we need to remind ourselves that the other side, in a contract dispute or competition, is human – with the same fears, insecurities and apprehensions we have. Knowing this, we can adopt a more empathetic approach leading to faster resolution.

The character of Robert E Lee was what made his leadership so effective. It’s the reason he is respected to this day.

The biggest lesson we can learn from Lee? Who we are as a person will ultimately determine what kind of leader we will be.

Lee, who hated war and was against slavery, experienced chest pains throughout his time as General. He would die of heart failure 5 years after his surrender, at age 63.

2 thoughts on “Robert E, We Need You Now”